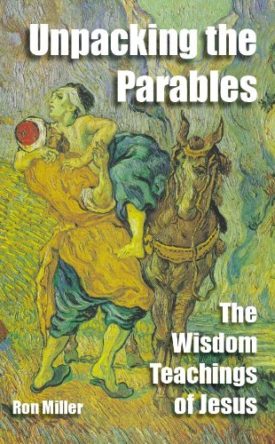 + View Gallery
By Ron Miller In Theology Tagged In books.

When the Gospel of Thomas was discovered in the sands of Egypt some sixty years ago, an earthquake hit New Testament scholarship. Evidence that Thomas might be earlier than the four gospels opened up some new doors. The author entered one of those doors in writing this book. He used Thomas’s version of a parable whenever that existed. And the Jesus discovered through this method might surprise you.

Ron Miller received his PhD in Comparative Religions from Northwestern University. He holds five earned degrees and has studied in Germany and Israel, as well as in the United States. He has lectured at hundreds of churches, synagogues, and mosques throughout the United States. He is the chair of the Religion Department at Lake Forest College in Lake Forest, Illinois, where he has taught for more than thirty years. Ron is cofounder of Common Ground, an adult education center of interreligious study and dialogue since 1975. Miller is the author of many books and articles, including Healing the Jewish-Christian Rift (Skylight Paths), The Hidden Gospel of Matthew (Skylight Paths), The Gospel of Thomas: A Guidebook for Spiritual Practice (Skylight Paths), The Sacred Writings of Paul (Skylight Paths), Dialogue and Disagreements: Franz Rosenzweig s Contribution to Jewish-Christian Dialogue (University Press of America), and Unpacking the Parables: The Wisdom Teachings of Jesus (Evan Blake Publishers). For more information on Ron Miller, visit ronmillersworld.org.